Birthdays Are About As Cool As NYC

Well, my life has been a crazy crazy mess of awesomeness legendary-ness (more on this word usage later) for the last little bit.

I've got about four half-written posts about several different things, but haven't actually gotten around to posting them because I'm waiting on something.

So, since this one goes back the second farthest, we'll start here. :D

Waaay back in the last week of July, something special happened.

I went home.
To NYC that is.
And it was the best.
THE BEST!!

I turned 19, for all of those who didn't know.
(But you all probably do, but whatever)

So, of course, I couldn't help but think that I needed to update you all on the awesome legendary goings on that my birthday, and NYC adventures included, because...well, because I want to.

SO the day actually started out with presents, and since I wasn't expecting anything, I was pleasantly shocked and delighted by the wonderful gifts I did receive. :D

The Rubster and Mom gave me two things from South Africa (where they just returned from) -- a beautiful, light blue scarf that's covered in outlines of giraffes. I totally love it. It's also really light, which fills in a gap in my scarf collection -- all of mine are pretty heavy and good for winter, but not so much for spring and summer.

I also got a pair of serving spoons -- they're wooden and have some cool designs on them. I love it! More cool stuff for my apartment!!!

Don't worry. When I have a straight piece of mind I'll share photos with you.

Then, dear dear Katie gave me the present that just blew me away. 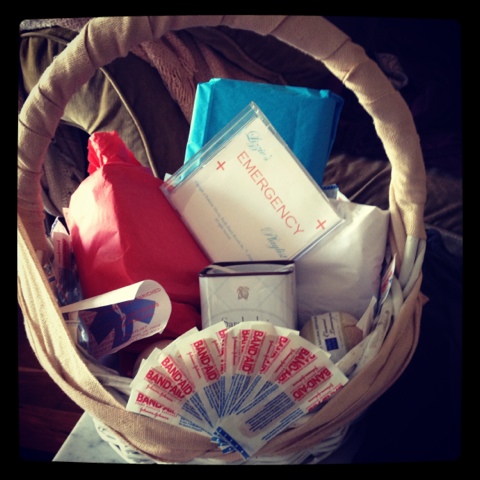 It included a little note that said this:

THIS EMERGENCY KIT INCLUDES ALL ESSENTIALS FOR A HEALTHY MIND, BODY, AND SPIRIT IN THE TREACHEROUS LAND OF THE YOUNG ADULT.
THE FOLLOWING ITEMS ARE INCLUDED:
2 TYPES OF GLUCOSE ENRICHED MEDIA
2 COCONUT INFUSED BOMBS
1 REVITALIZING PERSONAL HYGIENE SET
1 CUSTOMIZED PLAYLIST
1 GUIDE FOR SURVIVAL IN THIS WORLD AND POSSIBLY THE NEXT.
CERTIFIED AUTHENTIC BY AN EMT

First of all. Hilariousness. She's an EMT at school, so the whole theme is just priceless. (Yes, those are band-aids taped on and it is indeed wrapped up in an ace bandage)

The different items were also just amazing.
The "Glucose Enriched Media" was a box of Truffles and some really nice Sarabeth's Hot Chocolate mix. Mmmmmmmm.
The "Coconut infused bombs" were bath bombs. They smell SO amazing. (One downside though: I don't have a bath. Guess I'll just save them for a special occasion.)
The "Personal Hygiene Set" is self-explanatory. It's Lacome. It's amazing.
The "Customized Playlist" should make everyone jealous. I have such a good friend!! :D (No, I'm not telling you the songs. I'm content just listening to them over and over and over and over and over.....)
And the "Guide for Survival"? A book called The Fault In Our Stars. Omigosh so amazing!! I'm only a little bit into it, but AAAAHHHHH! So many feels!

I got one other present when I got back to Utah that totally surprised me, but I'm totally excited about as well. 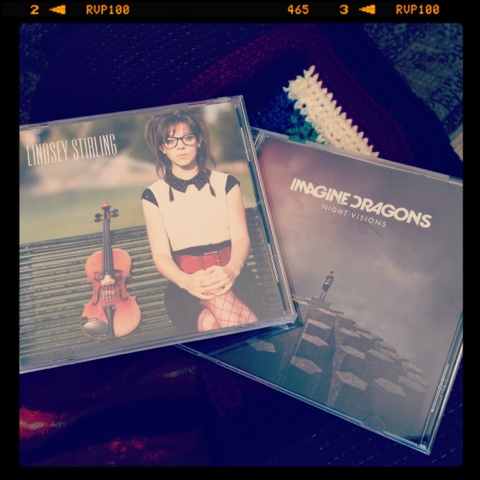 My dear brother (and *ahem* someone else) gave me these two albums. First of all: Imagine Dragons. Their album is the first one I've ever listened to and LOVED from start to finish. That takes awesomeness legendary-ness.
And then, Lindsey Sterling. Oh my goodness she's just phenomenal. I wish I was as cool as her.
Check her out here. My favorite song of her's: this one. Beautiful.

And then of course, the ultimate conversion of Imagine Dragons and Lindsey Sterling: Radioactive. If you don't love it you have no soul.
(Just kidding) 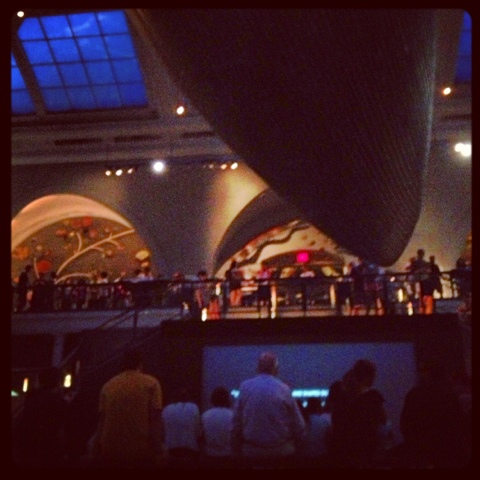 Chilling out under the whale in the Museum of Natural History (Dinosaur Museum to me.)

Eating at Dinosaur BBQ and delicious German Chocolate Cake at Magnolia Bakery.
I didn't take a picture, sadly, but know now, if you're ever wondering how to win a way to this girl's heart, giving me a piece of this delicious cake is it. Or making me one. :D

All in all it was a quiet birthday, which I couldn't have loved more. It was just what I needed. And the rest of the week. Getting to enjoy my city and seeing all the people I love and miss so so so much!

Here's a short sum up of the rest of the week's activities.

Went to a Thrift Store in Brooklyn. I got an adorable pair of pink heels, and the discoveries within the stores were just priceless. Such as this gold pair of pants that come straight out of Mamma Mia, and the disturbingly large collection of Mason Jars that I'm sure some Mormon Mommy Bloggers and/or hipsters would go nuts over.
(Ignore my stereotypical comments. I mean no offense.) 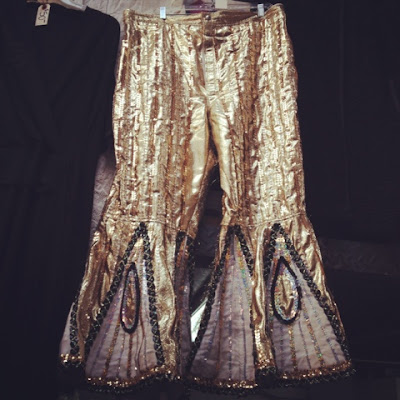 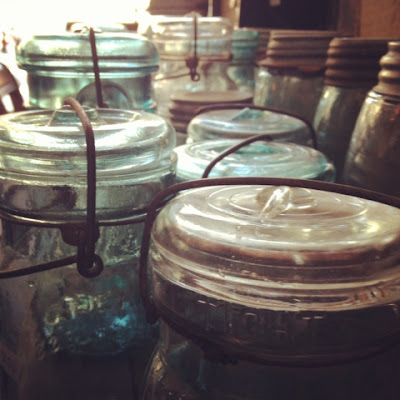 My dear Aunt and Uncle came into town for the day, and not only did we get to enjoy their wonderful company and their adorably amazing kids, but we went to Serendipity's as well. Their frozen Hot Chocolate is to DIE for. 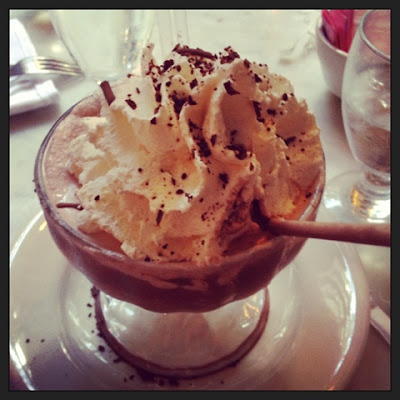 The dear Rubster dragged me to the Museum of Math (yes, that is a thing, and I only say dragged because of my sheer dislike of math, not my sister), which was surprisingly awesome legendary, and had some phenomenal little exhibits and fun stuff to do.

Like this cool little painting/pattern thing. Rubster and I went all out. :D 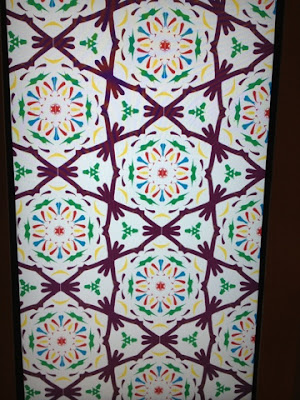 They also had this cool geometric shape builder thing, that you could build one and submit it for votes, and the design with the most votes at the end of the day would get printed out on their 3D printer. And they all looked pretty amazing.

Ruby submitted one, and I may or may not have done a bit of finagling and got hers to win. :D
Although we didn't get a chance to go back and check and see if they printed it out.
She'll have to go down and see for me. This was her design: 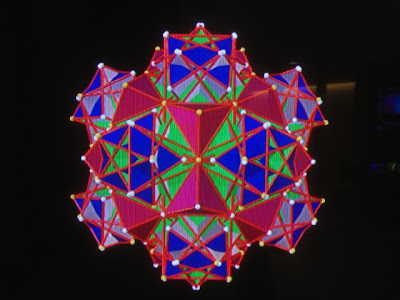 The Rubster also hadn't seen Star Trek - Into Darkness, so I took her down to Union Square to see it. We both cried like babies and giggled at the appearance of the Tribble. If you haven't seen it, you're seriously missing out. It was LEGENDARY! (It was also my third time seeing it. I can't complain.) 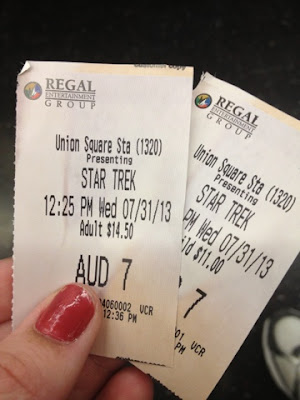 Speaking of movies, I went to two others while I was in NYC. One of which was Joss Whedon's Much Ado About Nothing.

First of all, if you don't know who Joss Whedon is, think this: the Director of Firefly & Serenity. If that's too obscure for you, think of the new Avengers movie. He directed that. Basically, he's amazing.

I was super excited when I found out that he was doing a movie version of a Shakespeare play for several reasons.
A) He's Joss Whedon.
B) I love Much Ado -- One of my favorite comedies.
C) The cast was top notch.
D) I was going to get to see it with Katie dearest (we swore that we wouldn't see it until we were together).

It had several really cool aspects to it. It was all in Black and White, and while set in a modern time, all of the original language was used -- think Romeo and Juliet version with Leonardo DiCaprio.

All in all, I highly recommend seeing it. The moment I can buy it I will, because its one of those movies you could watch over and over and over again.

Disclaimer though: While the play is completely appropriate for kids, the movie itself isn't -- there's something about it being on screen with the extra details that probably isn't good, like the disturbingly (not really) large amount of alcohol in every scene. It isn't that big of a deal, seeing as that is apart of the actual play, but its completely different from on-stage.

But see it! Especially if you're a Shakespeare fan!

We ALSO went to see (we meaning Rubster, Katie and I) the first Harry Potter movie atop the Intrepid museum.

For those of you who don't know, the Intrepid is an old aircraft carrier that, upon it's retirement, was turned into a Museum down by the piers in Manhattan. Such a cool museum.

Apparently they have this summer thing where they play a movie on a huge projector screen and allow people to come watch!
And there are several plus's to this.
1. It's free.
2. You get to watch the sunset on the deck, as the movie starts just after the sun goes down.
3. They encourage you to bring a blanket or lawn chairs, and even food to enjoy the movie.
4. During the summer, its just beautiful, and as it is in the evening, its cooled down and you even get a little breeze off of the river.
5. Great for kids -- depending on the movie they play. Some are a little bit more mature -- like they played Top Gun the week before (or was it the week after?), but they're always pretty solid, classic movies that you're sure to get excited about! :D 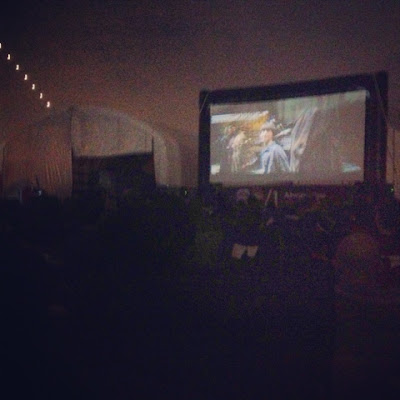 I also got to see some old friends from High School -- which was definitely awesome legendary. It was great to catch up, cause I missed them a TON. Plus, no offense to Provo, but I missed people who had a bit of a foul mouth.

It was also shocking to realize how drastically different BYU is from other colleges. I've had 3 roommates get married already, and only two who haven't. You tend not to have those issues at other colleges.

There was a ton of other stuff I did over the week, but if I were to write about all of it, you guys would get incredibly bored.

But I'll leave you with one last thing.

On Saturday, my last day, we went to the beach, which was interesting at first, seeing as it was raining when we left. However, by the time we got there, it had stopped, and we had the luxury of having a nearly empty beach to enjoy. The sun even came out after a while, and seeing as I didn't think to use sunscreen due to the weather, not a lovely sunburn on my back and shoulders.

We also turned the Rubster into a mermaid. I'm sure that any minute her hair will turn red and she'll start singing Part of Your World. 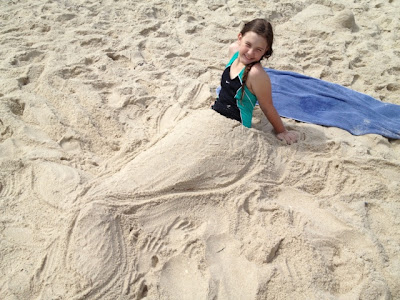 Isn't she getting so BIG! My heavens! She's grown 3 inches since Christmas, and I swear she looks like a whole different person! A huge part of me just wants her to stop growing up! She's supposed to be my baby sister, and at this rate, she'll be taller than me by the time she's 12. She's only got 8in left to go. She's already 3 inches taller than I was at 12, and she's two years younger!

Anyway. Seeing as I've posted this just under a month after my birthday, I think that's pretty good!

Till next time ladies and gents (which will be very soon, I've got some BIG stuff I get to post!)
Up and Coming:
-Best Friends are better in person
- The six words I never thought I'd say
- Awesome vs. Legendary
- Shakespeare Festival
- Apartments and New Roommates (Plus, a new school year!)

P.S. Like the new background?
Posted by Elizabeth at 12:44 PM

Want me in your inbox?